Plague Queen, the demi-humans queen from Midas, and is the only tribe with a throne among the major sub tribes. She has been waiting for an opportunity to clear up the hatred between the demi-humans and the elves. She found Hades's ambition to enter the mainland, so chose to cooperate with her to attack the elves and even the human world. Under the joint resistance of the angels and human race, they were defeated and finally destroyed, Although Plague Queen was suppressed, there are still legends about Plague Queen in the demi-humans.

Plague Queen will be available in X-server Resource Tycoon from FEB. 15th to FEB 20th. Hurry up to summon this powerful hero, be sure to make her become your alliance and fight for you! Having her, you will have a chance to get the second part of Crown of Time, Timelost Pendant. 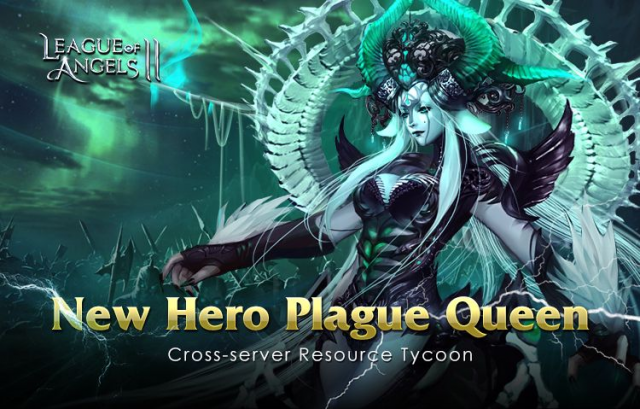 Deal (469%+17490) DMG to the enemy with the highest ATK and reduce their Rage by 200 (ignores Lv.1 effects that prevent Rage stealing or reduction).

①. When attacked, restore 100 Rage to the entire squad;

③. When an enemy dies, restore 200 Rage to the entire squad.

②.   Plague Queen reduces the Rage generation (from all sources) of all enemies by 50%;

①.  You are immune to negative effects (Lv.1) and have a 50% chance to remove control effects (Lv.2) before performing an action each round;

Hurry up to invite Plague Queen into your squad. Play League of Angels II from FEB. 15th to FEB. 20th and join the X-server Resource Tycoon to compete for this powerful hero! Stay tuned for more contents and have a great time playing LOA II!